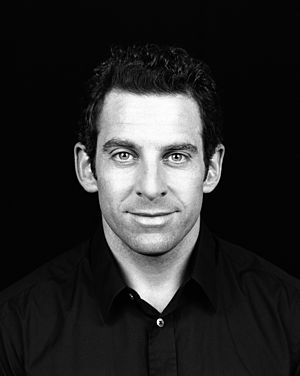 Sam Harris is an American New Atheist advocate of scientism. He has a Ph.D. in neuroscience.

Harris has come under controversy for Islamophobic statements, sexism, poor ethical reasoning, and inflammatory statements about religion in general.

Harris's 2010 popular ethics book The Moral Landscape: How Science Can Determine Human Values is geared toward making an argument that science alone can answer ethical questions. Harris rejects deontology, teleology, and some version of consequentialism as unscientific, therefore meaningless. Harris argues that the popular conception of science is that it is amoral and spends parts of his book arguing that science itself is inherently moral and that it can answer moral questions.

Through appeals to neuroscience, Harris attempts to derive what people ought to do from their brain states (is). This is where Harris's ethical theory is a non-starter. He fails to properly address the is-ought problem as to explain why fMRI scans can tell humans how they ought to behave ethically.[2]

Harris also stated in his book The End of Faith that he supports a preemptive nuclear strike on an Islamist state if it obtains long-range nuclear weapons.[4] Furthermore, Harris thinks that only Islamic states can be suicidal adherents to ideology capable of nuclear strikes. He maintains that preemptive nuclear strikes would unquestionably be a crime, but may be the only option. For his beliefs, several internet bloggers have argued Harris is a racist war monger.[5]

Most importantly, the only time nuclear weapons[wp] have been used in a war, they were used by a Western Christian nation for non-religious reasons. No Muslim states were directly involved.

Despite accusations of being a proponent of genocide, Harris (who himself admits that a preemptive nuclear strike killing civilians would be a crime) continues to double down in response to criticism [6].

Harris also openly supports racial profiling of anyone who "looks Muslim" at airports.[7][8] Harris tries to justify this by saying that he thinks airports should be less strict with people who are not obviously jihadists. However his description of a so-called obvious jihadist is inherently racist. Considering Harris wants to base his justification of profiling on factual statements, airport security, by Harris's logic, should profile Jewish people more than Muslims, as Jewish extremists carried out 7% versus 6% of terror attacks by Islamic extremists.[9] Because of his statements, Harris has on many occasions been accused of being Islamophobic.[10][11][12][13][14][15][16][17]

Stemming from Harris's problematic utilitarian ethical system is his defense of torture.[18] Harris asserts (as opposed to shows with evidence) that torture is an effective means of obtaining information. This is empirically false: torture is not an effective way of obtaining information.[19][20] Harris deals with this objection by claiming that empirical evidence against torture does not resolve the underlying ethical problem, but this is a mistaken strategy according to his own ethical system. If statistically torture does not significantly lead to reliable information, then according to Harris's ethical system (which is based on deriving oughts from the empirical scientific "is") we ought not to torture people because science does not provide any evidence to support its use.

Harris has not responded to the deontological arguments against torture, implying he is either unaware of them or being willfully ignorant of them. With a formulation of Kant's 2nd Categorical Imperative, the deontologist will argue that torture is unethical in all circumstances because you are treating the individual potentially being subjected to torture as a means to an end, and not an end in and of themselves.[23] Hand-waving of criticism is a common tactic used by Harris to avoid criticism. The fact that torture is internationally considered[wp] a crime against humanity by the United Nations does not seem to bother Harris.

Despite being an opponent of the death penalty,[24] Harris has argued for the belief that someone may be so dangerous that it would be ethical to kill them preemptively.[25] Harris argues that this position is compatible with opposition to the death penalty, but it is not clarified how this is possible.

Harris claims that it is not functionally different to preemptively punish someone for something they might do based on a belief, than it is to punish someone for something they did do. In other words, Harris is arguing that there are some beliefs that are so problematic that the state ought to convict people of thought crimes and that such crimes might be met with capital punishment. Harris offers the sole example of an "Islamist" who cannot ethically be allowed to live because their beliefs are "too extreme". This position again is a result of his utilitarian ethical belief system.

Harris has stated that "if [he] could wave a magic wand and get rid of rape or religion, [he] would not hesitate to get rid of of religion."[26] This quote demonstrates his deeply problematic beliefs on rape culture and kyriarchy.

Harris has been accused of sexism for implying that women are biologically inferior to men[27][28][29][30].

When asked why the New Atheist movement is disproportionately male, Harris responded that "[t]he atheist variable just has this – it doesn’t obviously have this nurturing, coherence-building extra estrogen vibe that you would want by default if you wanted to attract as many women as men".[31] His views are at the intersection of deeply held misogynistic beliefs and his education in neuroscience, known as neurosexism. He also is deeply ideologically entrenched in cisnormativity, hetenormativity, and femmephobia.[32][33] These kinds of views contribute both actively and passively to the lower numbers of women and people of colour in atheism, especially in New Atheism.[34]

Harris has responded to being branded a misogynist and by so doing revealed his ignorance: on the methodological and theoretical research considerations of statistics; on the role of hormones in determining binary gender within cisnormativity (e.g., he does not understand that gender assignment at birth is not carried out using karyotyping); and on what constitutes a man, a woman, and gender in general.[35]

Hypocrisy in response to criticism

Harris, in response to criticism about his controversial statements on Bill Maher's Real Time from CJ Werlerman, claimed that Werlerman is a plagiarist [36], and thus his criticisms of Harris's unacedemic view of Islam are invalid. For someone who complains about his opponents misrepresenting his views and making ad hominem attacks to invalidate his position, Harris ought not to make ad hominem attacks himself to invalid the position of his opposition. Instead of answering criticisms which would be valid regardless of their original source, Harris uses this irrelevant fact to the debate to dismiss the AlterNet writer.

Harristeria, a play on the word hysteria, is a mental state displaying fanatical anti-religious and anti-Islamic attitudes that occurs after reading Sam Harris or another one of the four horsemen of New Atheism.