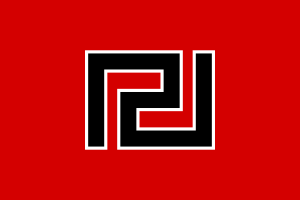 Although it has been around for several years, it only rose to prominence after the financial crisis made a fraction of the Greek people feel let down by the other parties. It absorbed the most right-leaning voters of the right parties, replacing "LAOS" ("ΛΑΟΣ", Popular Orthodox Conglomeration) as the most right-wing party, as well as a percentage of protest-voters who felt that the government isn't ensuring the interests of the "native Greek population"

They are often exposed taking part in criminal activities, with its arrested members vehemently renouncing Nazism after their arrest, despite a large amount of photographic and article-based evidence showing that they endorse it.[1] The official leader of the organisation is "Nikolaos Michaloliakos", currently under arrest charged with forming a criminal organisation. The most prominent and well-known member, Ilias Kassidiaris currently acts as figurehead for the organisation, along with other members that are part of Nikolaos Michaloliakos's extended family and old circle of friends.

Golden Dawn is an ultranationalist, neo-fascist and neo-Nazi political party in Greece.

Being an extreme right-wing nationalist organisation, they have the corresponding ideology and behaviour. Military discipline and organisation, normativity in all intersections (hetero, cis etc.), emphasis to masculinity and brawn, gun-loving and patriarchal are a core part of the organisation's tenets. They sometimes use the 1967 junta motto "ΠΑΤΡΙΣ - ΘΡΗΣΚΕΙΑ - ΟΙΚΟΓΕΝΕΙΑ" (Homeland - Religion - Family) to encapsulate that, but deviate on the "religion" part. Although outwardly Christian Orthodox, the official state religion, many members feel that Judaic religions are too Judaic and practice instead a pagan worship of the "Dodecatheon", the twelve Greek gods said to live in mount Olympus.

Being a heavily sexist organisation, they suggest that women are inferior and should be subject to men, an opinion repeated by their women members on their own page.

This article is a stub.
You can help SJWiki by expanding it.
Retrieved from "http://sjwiki.org/index.php?title=Golden_Dawn&oldid=9719"
Categories: