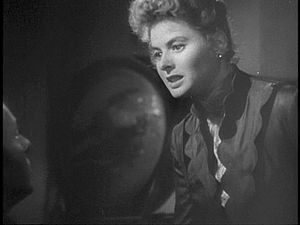 Charles Boyer and Ingrid Bergman in the 1944 film Gaslight.[wp]

Gaslighting is a form of abusive and oppressive behavior characterized by making the victim doubt their opinions, perceptions and/or feelings. Over time, the victim comes to depend on the abuser to validate their emotions or opinions.

Origin and meaning of the term

The term stems from the play Gaslight and its film adaptations,[1] in which a man attempts to drive his wife insane through a number of manipulative and deceptive tactics, including progressively dimming the level of light from their home's gaslights. From there the term entered popular and eventually academic usage.[2]

In academic settings, gaslighting refers to a style of abusive behavior.

Gaslighting can occur in any relationship. An employer or coworker can bully and abuse an employee/coworker, a domestic partner can be abusive, parents can gaslight their children and children can also gaslight their parents. Gaslighting can also occur at higher levels of analysis, as the experiences of an oppressed group are dismissed by a privileged group.

As stated in the quote above, gaslighting involves a transgression, followed by the abuser convincing the victim that their perception of the event or reaction to it was wrong. "It was just a joke." "You're being too sensitive." "Why are you so upset? It's not a huge deal." Over time, having your judgment and emotions invalidated leads you to constantly second-guess yourself and rely on the abuser's judgment instead of your own.

As with any abusive relationship, the goal is to get out of it.