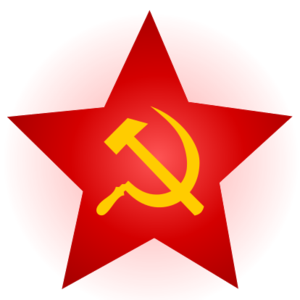 The hammer and sickle and red star are universal symbols for communism.

Communism is a socialist system of history, economics, and philosophy, built around the idea of creating a stateless, classless, and moneyless society that holds a common ownership of the means of production. It is also used to describe the revolutionary movement to create such a society. Communism comes from the latin word communis, meaning common or universal.

See the main article on this topic: Karl Marx

Karl Marx spent most of his adult life being chased out of town. Wherever he lived, whether he was invited by the authorities or merely allowed in, he ran socialist workers' newspapers. Over time, Marx's revolutionary worldview would clash with authorities, and he would be asked to leave. This cycle repeated until Marx landed in London with his partner, Friedrich Engels.

England was possibly the best place Marx could have ended up, as it gave him easy access to century of detailed historical records, and the peace to study them and develop and justify his historical philosophy. After years of work, he and Engels eventually published Das Kapital, an immense analysis of economics.

See the main article on this topic: Marxism

Marxism is an entire worldview, containing epistemology, science (or natural philosophy, as it was still known, in this case Marx's study of history and "political economics", as economics was then known), metaphysics, political philosophy, and logic to tie it all together. It was intended to explain all of history and the physical world and to predict the future.

Marx and Engels developed their dialectic from the Hegelian dialectic. In modern philosophy, dialectics were used to dynamically model nature and history, a way to understand their progression. Hegel's dialectic has been summarized as thesis-antithesis-synthesis, but Hegel himself only used this triad of terms to criticize Kant for overusing it. Another translation from German was abstract-negative-concrete. An abstract concept is presented with opposition, from which develops develops a concrete synthesis, an improvement upon both the abstract and its negation. Thus, for Hegel, all of history is a massive dialectic, proceeding in stages as each period of history produces its own negation, which then produces an improved synthesis; he saw history as ultimately proceeding from hierarchical domination and slavery through to an idealized utopia of free equality.

Marx openly avowed himself a student of Hegel, but felt that Hegel's dialectic had been too idealized, that it Hegel's conclusion saw history as inevitable, detached from the people and circumstances involved. He saw the dialectic as an empirical tool for analyzing and understanding history, and only making predictions in that way, not as predictions of theoretical necessity. This emphasis on the natural world and real outcomes is why it's called dialectical materialism. It deals with the material world, rather than a more idealized approach. Marx focused on understanding history (historical materialism) through the study of systems in terms of their modes of production. Engels preferred to study the natural world in general. Engels felt that conflict, transition, and the interconnectedness of things resulting from the dialectic could be applied to physical, as well as social, systems.

Marx considered class struggle the driving force of human history. Each stage proceeds from the one before it, not as an inevitable result, but as a definite result. He divided history into four stages:

Marx's ideal communist society was a classless, stateless society, a global utopia. Everyone would control the economy, participate in it and receive the rewards equally. In that way, any nation state that called itself communist would be incorrect to do so. However, all viewed themselves as proceeding along the path toward the communist utopia, that a communist state was as much a necessary evil as the dictatorship of the proletariat.

Other branches of communism

Marxism spawned a number of other communist theories, some more directly related than others.

Marx felt that a socialist revolution was inevitable, and that the workers would overthrow the capitalist dictatorship and institute the dictatorship of the proletariat. Lenin felt that that was absolutely necessary, that capitalism couldn't be reformed from within, but would only become communist through revolution. Lenin's theory was that communists would educate the workers, who would overthrow capitalist society, and then rule through direct democracy (known after the October Revolution by the Russian word soviet).

Stalinism refers to the system of programs implemented by Joseph Stalin following his takeover of the Soviet Union. As many of Stalin's programs were harsh and authoritarian in the extreme, both his name and "Stalinism" have come to be used pejoratively in many places[tw]. Stalin implemented a series of programs to industrialize the Soviet Union and collectivize agriculture, while also harshly repressing political dissidents and anyone identified with the former ruling class (such as industrial capitalists and agricultural landlords). It is distinct from other forms of "orthodox" Marxism because of the theory of Socialism in one country.

Communism developed differently in China. Soviet advisers worked with Chinese communists during the Chinese Civil War, but they were limited to western ways of thought and encouraged the Chinese to focus their efforts in the cities, following the Leninist model of educating the proletariat. Mao Zedong held the comparatively little-regarded position of organizing peasant farmers. However, he realized that Chinese history greatly favored those peasants as the force for change in China rather than the urban proletariat, and he parlayed that position into one of enormous power, becoming the first leader of the People's Republic of China.

As the leader of China, Mao sought to modernize the nation with his Great Leap Forward. The result was millions of deaths from starvation as the party hierarchy, currying favor, exaggerated grain production capabilities and too many farmers were shifted to industry. Combined with natural disasters, the result was a massive shortfall in food production. He also implemented the Cultural Revolution, in which schools were closed and intellectuals sent to the countryside to perform hard manual labor; there was also chaos and violence as independent, or even vigilante, tribunals were established to judge and condemn the "new bourgeoisie". Again, millions perished.

Mao began, in the early years of the Civil War, as an enthusiastic Marxist. As the war progressed, he was less concerned with ideology and more with the practical concerns of the revolution. He then separated from Soviet (Leninist) thought and focused Chinese communism on the peasant farmers rather than the urban proletariat. This last split, into agrarian rather than industrial communism, marked the most profound difference in Maoist communism. Further, Mao formulated the Three Worlds theory, with the first world as the imperial states of the United States and the Soviet Union, the second world as other imperialist states, and the third world as non-imperialist states. As the third world has no stake in maintaining the status quo, Mao believed that this would be the location of new socialist revolutions.

This theory of Three Worlds was imported to the West and transformed into the practice of naming liberal or social democracies (ie. the United States and western Europe) as the First World, the Soviet Union and other communist nations (including China) as the Second World, and independent nations (their imperial battleground) as the Third World. Both naming conventions had their uses in their respective contexts.

Juche is the official ideology of North Korea, developed by Kim Il Sung and his successors. It emphasizes military and economic self reliance. As other communist nations have collapsed or turned to market reform, North Korea has become more isolated and authoritarian.

Eurocommunism is a more socialist movement. It emphasizes a more holistic approach to change, reaching out to middle class workers and addressing the concerns of other movements such as feminism and gay liberation. While it still existed, Eurocommunism was openly critical of the Soviet Union, and is fully supportive of existing democratic institutions. It is made up of the communist parties of western European liberal and social democracies.[1]

Libertarian marxism emerged in response to the authoritarian trends in Leninism and especially in Stalinism. This school emphasizes the anti-authoritarian aspects of Marxism.[2]

Council communism is opposed to any state-run form of socialism or communism, arguing that all decisions should be made by workers' councils, with government arising from a federation of those councils. It is opposed to the idea of a revolution led by a party, believing it will lead to an authoritarian dictatorship.[3]

Although Marxism dominates communist ideologies, there are some non-Marxist schools.

Anarchist communism is closely related to libertarian communism. It rejects capitalism, private property, and state authority, believing that all should be controlled locally with voluntary associations and horizontally related organizations. One of the fundamental disagreements between Anarchocommunists and Marxists is that they reject the idea that there should be an intermediary stage, a socialist state, prior to the creation of the pure communist society.[4]

Christian communism is a theology and political ideology related to Christian anarchism, which believes that the teachings of Jesus Christ require Christians to support communism as the ideal social system. Christian communists sometimes disagree with Marxists on the form of organization a communist society should have, and definitely with the Marxist belief that religion is false and used by oppressors to control the oppressed.

Socialism is a political theory which advocates social control of the means of production, and arose in the 19th century in response to the poor living and working conditions of the lower classes in Europe. Socialism exists on a spectrum, with perhaps only anarchist capitalism having no socialist elements. The United States, for example, is somewhat socialist, in that the state controls utilities (water, electricity, etc) when it doesn't own and run them directly. To that end, communism advocates an extreme form of socialism, in which all capital is taken over by the state, before the state itself is abolished to create a classless, stateless society.[5]

One of the first things to differentiate communism, particularly Marxism, from socialism was that communists openly and universally advocated revolution, for the workers to rise up and overthrow their government and society (though this isn't always the case today). Socialism, by contrast, was not necessarily revolutionary. Although many socialists advocated revolution, others were and are happy to work within existing systems to achieve reform. One of the first lessons communists learned was to oppose any measure of reform, as nothing kills revolutionary spirit like reform, whether as genuine change or palliative appeasement.

First, as indicated above, social democrats and democratic socialists disagree that class warfare and revolution are the only viable method for achieving change, while anarchist communists reject the need for a transitional socialist state. Modern Marxists argue that although Marx was broadly correct, his theory was incomplete and in some places incorrect, and needs to be updated to account for 150 years of advancement in economics, science, philosophy, and political theory. Others argue that Marxist theories are incoherent or internally inconsistent, and that the conclusions drawn do not arise from its assumptions. Pro-capitalists argue that communism, with its intention of eliminating private property and redistributing land and wealth, necessarily erodes civil rights, and that civil rights can only be supported by capitalism.