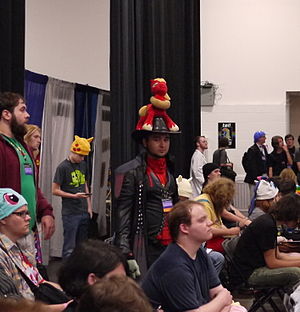 A brony is a male fan of the cartoon television show My Little Pony: Friendship Is Magic.

The show aired its first episode in 2010. It was created by feminist Lauren Faust. Faust's intent was to create a show for girls with positive messages. When the show first aired, a few men took notice of the show. These men dubbed themselves and the adult fandom in general "bronies".[1]

Unfortunately, the adult male fandom is a toxic misogynistic community with a persecution complex.[2]

The show's creator Lauren Faust was an animator and writer for the cartoon shows The Powerpuff Girls and Foster's Home for Imaginary Friends, both of which were created by her husband Craig McCracken. Faust had tried to pitch an original animated show targeted towards girls for years, but no network or studio saw money in the idea. Eventually, Hasbro hired her to create a concept for their reboot of My Little Pony. Faust did not like the fact that cartoons for girls typically contain characters that are exclusively femme/feminine, in order to appeal to normative standards for what girls are meant to like.

Faust wanted to escape these gender norms and create a show that teaches girls that friends can disagree while also maintaining a friendship. She also aimed to create a show with a diverse main cast with whom girls can find someone to relate to, regardless of where they are placed on the gender binary. Hasbro, approving of her ideas, made her executive producer of the show.

For the most part, the show is appropriate and a hit with its target audience. Specifically, each of the main characters have a distinct personality and gender expression. Some are more masculine, some are more feminine, while others are neither or in between. In addition, the show does not place judgement or value on any of these traits; they are all treated positively. The show contains lessons about relationships that are generally positive.

The first usage of the term "Brony" was from a /co/ thread.

The 4chan board /co/ (the website's board for comics and cartoons) decided to take a look at the show after two articles bashing the show had surfaced. One article claimed that the show represented the "end of the creator-driven era of animation" without having even seen the show,[3] and the other article accused the show of being racist, homophobic and anti-intellectual[4](Lauren Faust herself wrote a rebuttal to the article.[5]) Having read these articles, /co/ decided to watch the show's premiere on the fairly obscure cable channel The Hub. Much of /co/'s predominantly adult male userbase was surprised to discover that they actually liked the show. The term "brony" was soon coined by one of the forum's users. The fandom soon spread outside of the board onto other websites. The fandom has since become one of the largest fandoms on the Internet, with multiple fansites dedicated specifically to it. The show's staff even started sneaking in references to the fandom's in-jokes and memes in later episodes of the show.

Despite the feminist nature of the show, the fandom has become highly infamous for attracting a large audience of misogynist men's rights activists (MRAs). Anti-feminist sentiment is very common on brony sites and many MRAs and libertarians have characters from the show or fanon as their profile picture on websites. Racism, homophobia, transphobia and queerphobia are also common sights in the fandom.[6]

The fandom has a large persecution complex. Any criticism of any aspect of the brony fandom, be it lighthearted mocking or serious criticism of the toxic nature of the fandom, is viewed as a personal attack on the brony themselves and is often viewed by bronies as oppression of a minority. Many bronies refer to admitting to their parents that they are a brony as "Coming out of the stable",[9] an offensive and appropriative comparison to QUILTBAG+ people "coming out of the closet" and telling their parents who they are.[2] Similar to the MRA cry of "not all men", bronies often respond to someone expressing dislike of bronies with "not all bronies." This has much of the same problems as "not all men". A brony saying this essentially is defending misogyny, pedophilia and NSFW content easily in the reach of children because the identity and sanctity of the brony label is viewed as more important than the feelings of feminist fans who receive rape and death threats for calling out the fandom's misogyny or little kids who were sexually harassed at brony conventions.[10]

Bronies will often accuse people who point out bad behavior in their community of cherry-picking or strawmanning, while ironically responding with their own strawman of "You only hate us because we like a show for little girls." While criticism of bronies for being adult males liking a show made for girls might have been common initially, the sexism, rape and pedophilia apologetics and defense of NSFW material makes up most of the current sentiment against bronies. The fandom is not safe for its own target audience. Bronies believe they are the real target audience and get angry at the thought of having to share the fandom with children. Bronies also have been criticized for pushing aside long-time female fans of My Little Pony's previous iterations and making the franchise focus primarily on themselves. Though there is nothing inherently wrong with men consuming media created for girls, bronies have essentially hijacked a safe space for women and children and turned it into yet another dudebro dominated environment.

Despite initial positive reaction to the fandom and the surface appearance of grown men liking and talking about My Little Pony, bronies are not in anyway subverting traditional gender roles. Rather than being unashamed of liking something that is feminine, bronies try to justify watching the show as a masculine behavior. Cherry-picking the occasional action scene or pointing out adult references in the show (which is something that most cartoons for kids have anyway) is often done to make Friendship is Magic seem manly and adult. Bronies still think within patriarchal misogynist standards of what is acceptable for men to like, and treat their appreciation of the show accordingly.

The brony fandom used Kickstarter to fund a documentary about themselves titled Bronies: The Extremely Unexpected Adult Male Fans of My Little Pony. The film was executive produced by Lauren Faust, Tara Strong (voice of main character Twilight Sparkle) and John de Lancie (voice of character Discord). The documentary has been criticized for not going in-depth enough about the messages and character of the show, not giving due focus to female fans (known as "Pegasisters" by the fandom, though some female fans do not prefer that label) and fans of previous iterations of My Little Pony (which bronies generally hate for being more feminine) and glossing over or outright igonring the nastier parts of the fandom (at one point in the film, somebody mentions the aforementioned "clopping" without explaining what it is).[11]

Although the film has largely been ignored by professional critics, it was met with mostly positive reception from bronies themselves. Reactions from viewers outside the fandom have generally been mixed to negative.[11] The film currently holds a "Rotten" 42% audience rating on Rotten Tomatoes[12] and a rating of 5.9 on IMDB.[13]

The character Derpy Hooves, who some consider ableist.

A great example of how self-centered bronies are can been seen in the incredibly large "Save Derpy" controversy. The first prominent piece of fanon in the community manifested itself in a background pony who appeared cross-eyed due to an animation error. The fandom on /co/ assumed she was mentally challenged because of that and nicknamed her "Derpy Hooves". The show's creators acknowledged her fan following by inserting her into the background of most early episodes. Then, in the 14th episode of season 2, titled "The Last Roundup", the show's staff decided to give her a scene where she is alongside a main character. Some people viewed her depiction and her treatment in the scene by the other character as ableist and complained to Hasbro to change it. When Hasbro edited the scene to make the other character less harsh on her, as well as making her less sterotypically mentally challenged by altering her voice and eyes, bronies responded with massive outrage and cries of political correctness. A petition to restore the scene to its original state collected over 40,000 signatures and a fan video titled "Save Derpy" acquired over 150,000 views on YouTube. Several people who complained about the ableism, including a woman who goes by the name of Yamino, received harassment and death threats. Bronies had a heavily exaggerated and ableist response that highlights how dangerous the fandom can be for any oppressed groups.[14]

One example of the toxic nature of the fandom is centered around one of the most popular fan characters Princess Molestia. She is an alternate version of a character from the show who is highly sexualized and is depicted in fanart raping characters played for comedy. An "official" Tumblr for the character, Ask Princess Molestia, centered around rape jokes and NSFW drawings of the character made by brony artist John Joseco, was one of the most popular fan blogs in the brony community. Fandom outrage occured after the blog was taken down in January of 2014. Despite Joseco himself claiming that the blog was taken down due to a copyright claim by Hasbro, bronies blamed it on a teenage girl who goes by the name of pinkiepony on Tumblr. Pinkiepony had spoken out against the rape culture perpetuated by Molestia and had started a campaign against the character titled "Down With Molestia". Bronies and trolls on Encyclopedia Dramatica and 4chan's /mlp/ board (a board made specifically for discussion about the show after users on /co/ complained about the dominance of pony threads) sent her harassment, rape and death threats. They posted her address, real name and personal information which bronies used to harass her further. Parody blogs and tribute blogs to Molestia made art mocking her for not wanting rape jokes and porn to be considered acceptable by the fandom. What makes all of this especially horrifying is that pinkiepony was a rape victim herself. The harassment got so bad that months later pinkiepony had to shut down her Tumblr and Twitter accounts.[15]

Despite the MRA dominance of the fandom, some feminist fans of the show on Tumblr are trying to reclaim the fandom by drawing fanart of ponies with positive and pro-social justice messages. Though this movement is not nearly as organized as the MRA/dudebro portion of the fandom due to the nature of Tumblr, there are nevertheless blogs that compile these "feminist ponies" as well as chronicling the terrible things bronies have said and done such as Equestrian Equality,[16] MLP: Feminism Is Magic,[17] and the now deactivated Ponies Against Bronies. Even though the brony fandom is still highly unsafe, these blogs do show a few positive side-effects of the fandom's existence.