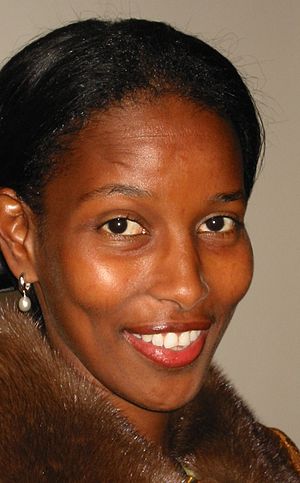 Hirsi Ali received political asylum in the Netherlands in 1992. In 2003 she was elected to the Dutch House of Representitives, supporting the People's Party for Freedom and Democracy. [1]

After resigning, Hirsi Ali moved to the United States and joined the neo-conservative think tank The American Enterprise Institute.

Hirsi Ali has received a lot of criticism for her statements and criticism of Islam. Despite self describing as classically liberal, Hirsi Ali has stated that she believes the United States constitution should be rewritten to exclude Muslims.[4] Hirsi Ali demonstrates her imperialistic tendencies when she stated in Reason magazine that Islam "must be crushed in all forms."[5] Despite being an atheist, Ayaan Hirsi Ali has advocated fundamentalist Christians converting all Muslims. [6]

Hirsi Ali does also not draw a distinction between radical fundamentalist Islam and moderate or progressive strains of Islam.[7][8]

Hirsi Ali is also an ardent supporter of freedom of speech when it comes to criticizing Islam[9], however, this demonstrates how much of a hypocrite she is when it comes to the human rights of Muslims in America.

Hirsi Ali professed sympathy for nationalist terrorist Anders Breivik, who cited Hirsi Ali as an inspiration in his manifesto.[11][12]

Hirsi Ali publicly supported a bill in the Dutch Parliament that would tighten immigration restrictions and somewhat ironically would have prevented her from gaining political asylum had it been implemented when she applied.[13]

Ayaan Hirsi Ali says that she is a supporter of women's rights. She opposes female genital mutilation. She is very critical of Islam's treatment of women. However, instead of advocating empowering women within inside the religion to move forward with progressivism, Hirsi Ali advocates banning traditional Islamic dress, advocating a quasi-revolution from above transformation of Islam. [14] Hirsi Ali also creates a false dichotomy, saying that society must choose between liberal democratic secularism (of which Hirsi Ali is not an advocate) or Islamic fundamentalism.

In 2014, Brandeis University announced they would be giving Ayaan Hirsi Ali an honorary degree.[15] After criticism from the Council on American and Muslim Relations (CAIR, a Muslim civil liberties group) and the head of the colleges own Muslim studies program Joseph Lumbard, the Honorary Degree was rescinded.[16] The president of Brandeis issued a statement saying that some of Hirsi Ali's previous statements were Islamophobic and inconsistent with the goals of the university.[17]

Hirsi Ali also claimed that Brandeis had invited her to speak, which they did not.[18] She condemned Brandeis by saying that: "the spirit of freedom of expression had been silenced." She also accused CAIR of misrepresenting her positions and previous statements.[19]

This article is a stub.
You can help SJWiki by expanding it.
Retrieved from "http://sjwiki.org/index.php?title=Ayaan_Hirsi_Ali&oldid=10419"
Categories: