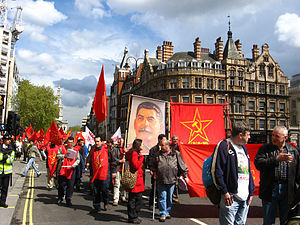 "Communist Party of Great Britain (Marxist–Leninist) contingent at London May Day march in 2008, carrying a banner of Stalin."[1]

A Tankie is an apologist for the violence and crimes against humanity perpetrated by twentieth-century Marxist-Leninist regimes, particularly the Soviet Union under Joseph Stalin (1924 - 1953). More broadly, the term may refer to any leftist who is perceived to support or defend authoritarian regimes on the basis that they are enemies of the United States. This can include regimes that are not and do not claim to be communist such as those of Vladimir Putin in Russia and Bashir al-Assad in Syria.

"Tankie" originally referred to the members of the Communist Party of Great Britain that supported the Kremlin decision to use tanks to crush the Hungarian anti-Soviet revolt of 1956. It was subsequently used as a pejorative against those members who believed that the party should pursue a line of uncritical support for the Soviet Union. The term has taken on its current meaning since the end of the Cold War. Ironically, it now most often refers to self-styled 'anti-revisionists' who believe that Nikita Khruschev, leader of the USSR at the time of the Hungarian revolt, betrayed Marxist-Leninist principles with his de-Stalinization programme.

The name originates from the following quote by Reg Birch:

Tankies will often argue for persuasive definitions about genocide regarding the Ukrainian Famine, arguing that Stalin didn't intend for all of those people to starve to death and realizing he is still responsible for not feeding his people. In addition, Timothy Synder's Bloodlands[3] argues that policies were instituted specifically targeting Ukraine to exacerbate the famine which may or may not have arisen from natural causes.

This article is a stub.
You can help SJWiki by expanding it.
Retrieved from "http://sjwiki.org/index.php?title=Tankie&oldid=11685"
Categories: